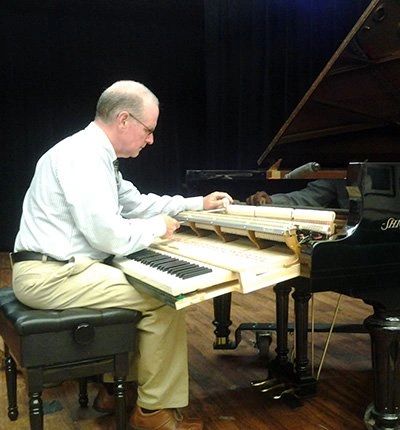 Welcome and Thanks for visiting our site.

There's much to see here. So, take your time, look around, and learn all there is to know about us. We hope you enjoy our site and take a moment to drop us a line.

I have been a full time Piano Tuner-Technician for over forty years. Soon after completing an apprenticeship with master rebuilder and concert technician, Steve Fairchild Sr. RPT, and an apprentice rebuilding program through the Piano Technicians Guild under Master Craftsman Ernie Juhn, I began to establish a career in piano tuning, repair and rebuilding in the greater New York metropolitan area. My duties included concert preparation, warranty repairs, in home tuning and appraisal work. I have had the opportunity to work with many artists in different venues. As a consultant I helped in the collection of data and professional input for “The Piano Book” by Larry Fine RPT. (Brookside Press, Boston, Mass)

I passed all three of The Piano Technicians Guild tests in 1980, earning a 90% which qualified me to gain R1 status and made me an automatic CTE (Certified Tuning Examiner). The tuning section of the exam was administered by Dr. Al Sanderson and performed in front of a committee of Master Tuner/Technicians. These tests prove a high degree of competency; one must receive at least an 80% to pass.

I went on to hold every office consecutively in the Local chapter of the Piano Technicians Guild in New York, including President and delegate to local, regional and national conventions. I have been an instructor at local regional and national institutes and served on examining and Seminar committees at the local and state levels.

After Consulting the Tampa Bay Performing Arts Center(AKA The Straz Center) on their rehearsal and concert Pianos, I moved to The Tampa Bay area of Florida to Help the Center with their pre-opening season and their opening Gala performances. I then served as the resident concert Technician through the first season. And then went on to build a free-lance business in Concert tuning, rebuilding and repairs in the greater Tampa Bay Area.

I continue to serve my list of clients and prepare concert pianos at the recital halls and music festivals both here and abroad.  I represent a broad spectrum of piano manufacturers in consulting and warranty service.

When I am not working, I like to spend time with my wife, four children, son-in-law, daughter-in-law and five grandchildren. (We are rarely all together in one place!)